Learn the possibilities to set up environments like debug, staging and release for your iOS app.

When developing an iOS application, we most likely will have to setup multiple app environments for the different phases the app goes through like debug, testing and release.

Xcode provides us with the tools to do that. In this article, we'll look at how to manage different build configurations for those environments and how to access them from code.

When we first create an Xcode project, it automatically creates an app target, two test targets, one scheme and two configurations for Debug and Release.

That is already a great start. To add more environments and to setup them to our needs, let's first understand the different concepts Xcode provides.

Let's start with the most basic one - an Xcode project. An Xcode project contains all the code files, resources and information needed to build a product. A product can be for example the debug or the release version of the iOS app.

Projects contain one or more targets. An Xcode target specifies how to build a product. The instructions for building a product are the build settings and build phases. A project defines default build settings for all its targets. Each target can override those default settings.

An Xcode scheme defines what happens when we execute actions like build, run, test or profile. For example which build configuration to use when we are building the app.

Since Xcode already created the Debug and Release configurations for us, we only need to create one more. For that, we can use the + button in the configurations section. Here, we can choose which of the existing configurations to duplicate.

We duplicate the Debug configuration and name it for example Staging or Testing.

Next, we add a scheme per configuration to be able to quickly switch between them when we run the build or the test action in Xcode.

After choosing Manage schemes, we can rename existing schemes and add new ones. 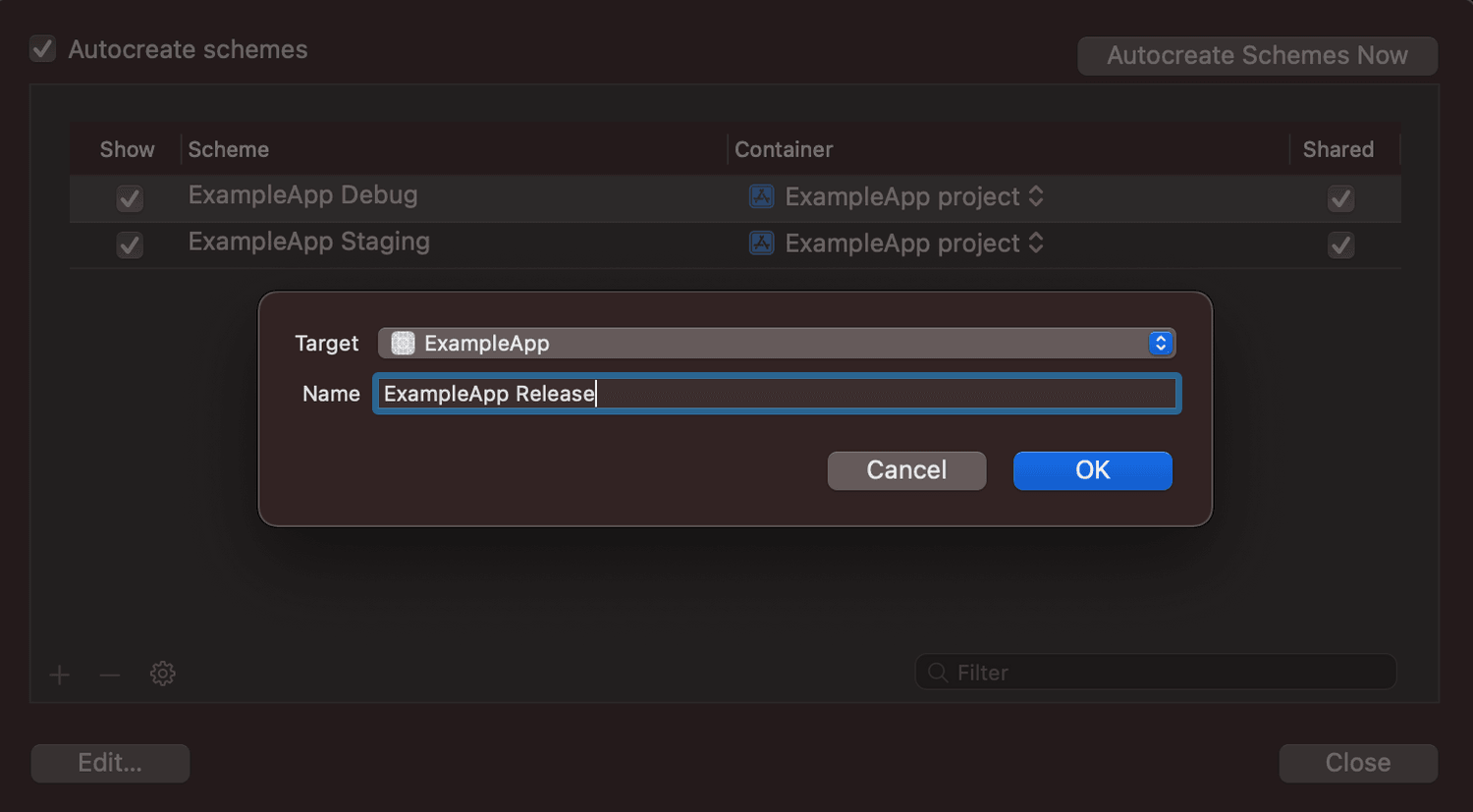 In our example, we rename the existing one to ExampleApp Debug and create two more named ExampleApp Staging and ExampleApp Release.

Now, we need to go though every action in every scheme and choose the associated configuration to run. 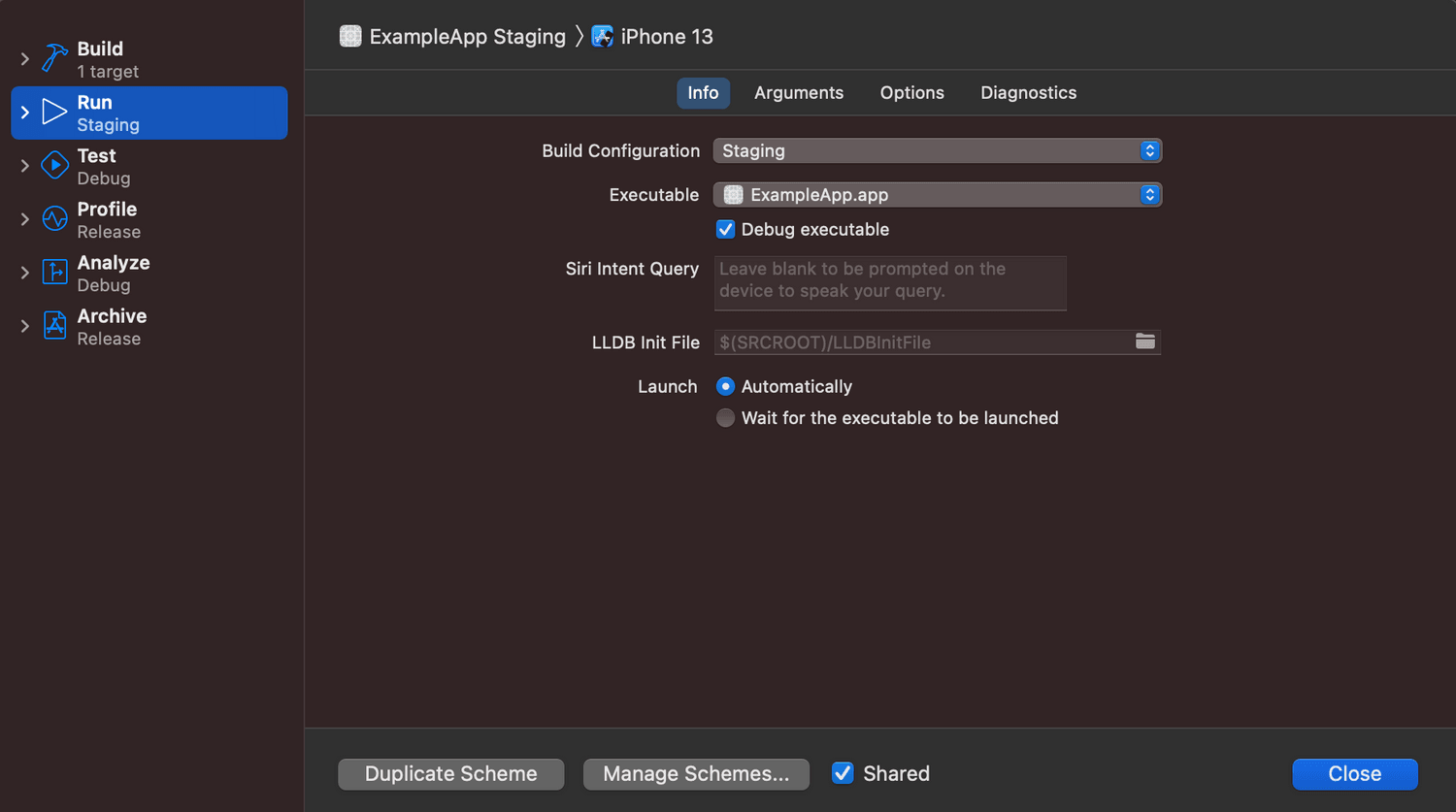 Customizing build settings for each configuration.

We can do the same with the app icon or the app name.

As we can see above, we defined a custom build setting called API_URL, so we are able to use different API endpoints for each configuration.

After doing that, we want to access our custom configured value in code. The first step to do that is to add the custom setting to our Info.plist by referencing the build setting with $(VARIABLE_NAME).

Now, we can access the configuration value in code as follows:

And that's basically it. With this approach, we can add as many configuration values as we need.

We can also add a representation of the build configuration to our code for example to be able to activate certain features only for certain environments or to manage those values directly from code. This might look something like this:

Buy me a coffee

How to add local Swift Packages to an iOS project

Learn how to add, update and delete remote dependencies using the Swift Package Manager and Xcode

Memory management for async/await and tasks in Swift

Learn about weak self references when working with the async/await API.

Learn how to avoid retain cycles when using the Combine framework in Swift.

How to build a configurable widget with WidgetKit and SwiftUI

Learn how to allow users to customize their widgets.

Building widgets for iOS applications with WidgetKit and SwiftUI

Learn to create widgets to show your app's content on the home screen.